SOARING SPIRITS: A collection of Indigenous shorts
JUNE 17th, 7pm, Online - Arts Week
Details coming June 1st on how to participate
Stay after the film for a conversation with the host and some of the filmmakers!

Curated and Hosted by Cher Obediah
Cher started out in theatre at a young age and followed that path through college. She shifted her focus to television and worked as a reporter before leaving to expand her skills in a production house. After years of honing her craft she launched her own production company and began to focus on film. Cher has a passion for projects relating to Indigenous issues, reconciliation, cultural reconnection, youth initiatives, inequality and injustice.  Her work has taken her across Canada into the United States and overseas, but her favorite place is within her creative community in Hamilton Ontario. 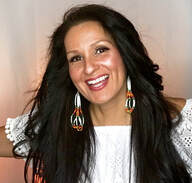 Iethiien:ne Ratiskáokon:á (What We Leave for Our Children ), 2m, Dr. Karen Hill
​This short film depicts the life changing event that lead to a connection with Indigenous Medicines as part of life and practice for Dr Hill, a Mohawk family physician from Six Nations of the Grand River Territory.

The Eagle and the Condor, 4m, Paulette Moore
Water protectors recall the power and violence of the 2016/17 Standing Rock action camps as they rely on ceremony to resist resource extraction and heal our modern world.

Taken Home, 17m, Jonathan Elliot
Shortly after being placed with a new foster family, Tom and Claire, two young Mohawk siblings are forced to confront the realities of their situation as a dark secret threatens to tear them apart forever. Taken Home is a film about the inability of Indigenous youth to maintain a connection to their culture and identity while in the foster care system and the effects this institution can have on the children forced into it.

The Guide, 11m, dir. Yi Xie, wr/prod. Carla Robinson
Danny struggles to maintain the restrictions of his pancreas disease and often finds himself in the hospital. He keeps dreaming of a bear and doesn’t understand why. His special friend Wari who has been a positive influence in his life tries to help Danny understand guides in Indigenous symbolism and encourages him to take better care of himself. Things change when Wari ends up in the hospital at the same time as Danny.

Moving Voice, 10m, Janet Rogers
​A Telus STORYHIVE short doc about Mohawk poet E. Pauline Johnson and her travels in the early 1900's told in poetic narrative.
Her Water Drum, 16m, Johnathan Elliot
In the wake of her daughter's disappearance, Jolene, a single Mohawk mother, is forced to pick up the pieces of her life and navigate an increasingly strenuous relationship with her troubled son David. As secrets emerge, their relationship faces its toughest challenge yet as they confront the reality of their situation.
This film deals with the topic of Missing and Murdered Indigenous Women in Canada, highlighting the impact it has on individual families and their communities.

The Getaway, 1m, Shane Pennells
Two men try to rob a bank, with unintended consequences.Other: This was one of 6 accepted entries in the Hamilton Film Festival's 2019 Film Challenge
​
Translation, 3m, Shane Pennells
A recently-deceased man must come to grips with his own mortality and separation from his family. Other: The film was done for an online film contest and came in 12th out of 220 worldwide submissions

Intentional Blindness, 5m, Cher Obediah
Intentional Blindness is based on a Six Nations land claim that captured national attention in 2006. The small town of Caledonia in southern Ontario flooded with media and violence. A lack of education on Indigenous history played a significant role in the destruction at that time. Years later, long time Indigenous educator Rick Hill shares his thoughts on how it happened, what went wrong and more importantly his winning formula for the future.

TEKAHIONWAKE, 20m, Shelly Niro
A short plethora of poetry written by E. Pauline Johnson, a Mohawk from Six Nations Reserve.  She went onto perform across Canada, the USA and Britain at the turn of the 20th century.
QUICK LOOK
JANUARY
Submissions Open

Wed 12th - Be In The Room: See the film - Meet the makers, Westdale Theatre
NUMB with writer/director HARRIS GOLDBERG

APRIL
FACEBOOK LIVE:
LORD OF THE RINGS: THE FELLOWSHIP OF THE RING - TALK WITH COLIN DONCASTER
EVENT